Your browser doesn't support the features required by this party, so you are presented with a simplified version of the invitation. You're pretty much missing out. Maybe you can try The TEXT VERSION

INVITE YOU TO SHAMBLE ON DOWN TO 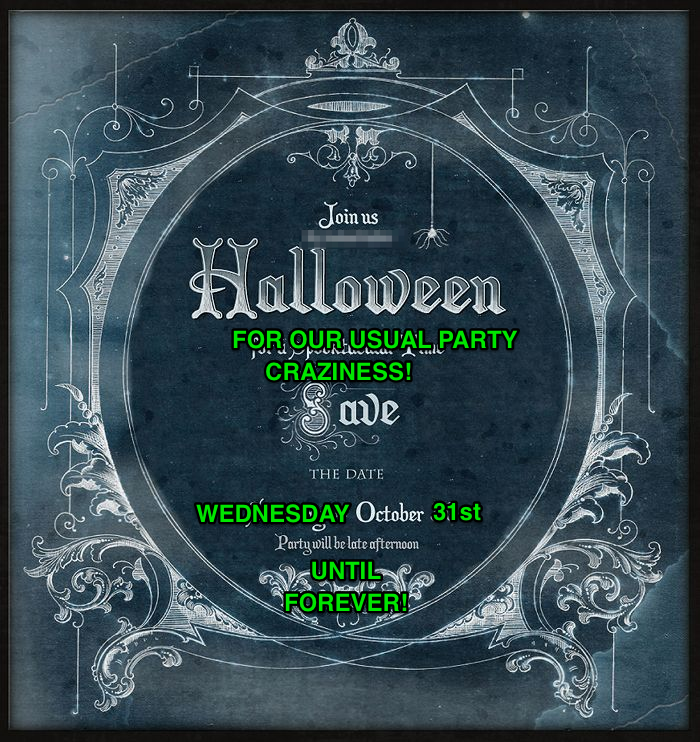 FIND OUT WHATEVER HAPPENED TO THE TRANSYLVANIA TWIST!!!


Some folks will go out with kids for grabbing candy in the streets, other folks will create the partay Food: There will be food, with vegan / gluten free and veggie options available.

Accessibility notes:
- Bus routes: #10 / #50 stop three blocks away at 51st and Charlotte. #19 stops five blocks away at Tennessee and 51st, though if you keep riding it, you'll eventually show up by 51st N Taproom / The Nation's Bar and Grill and can just get out there half a block away.
- There are two buildings on site. The building in the front has two steps up to both front and side entrances. The building in the back has ground floor access and a second floor that is accessed by stairs. There is a large backyard with a paved section.

This proffer is being provided to you as-is, in the moment, malum in se, with no guarantees of suitability for purpose, fit, finish, set, setting, pet, petting, vet, vetting, core or Corvetting, and may or may not contain (or be inclusive of, limited to, unlimited from, unhinged toward, abreast, abroad, or aboard) sections, samples, composites, particulates, particular (or not in particular) participles, flatulants, or overt or inadvertant derivatives, integrals, or compound fractions, as judged or deemed by this or another competent, coherent, or incompetent jurisdiction (or jurisprudence, so help me Gwar), as outlined in the addenda included by reference (hereafter, "reeference") in whole or in part, in nomine Patris et Filii et Spiritus Sancti, as attached via fiduciary obligation to franchise or subsidiary, domestic, foreign, Caribbean (Queen, to wit, "Now we're sharing the same dream / And our hearts they beat as one / No more love on the run."), Dominican, or established henceforward under the domicile constituted on the island of Vanuatu. Therefore, let it be resolved and instituted, viz., "mea navis aëricumbens anguillis abundat", that NO WARRANTY EXPRESS OR IMPLIEEEEEED (YOLO TODUM, MENS ET MANUS!), SON, FATHER, MATER DEI, LLC., SHALL HENCEFORTH AND FORTHWITH PROVIDE ONLY VENUE, JAMS, AND CAVE OF BOXES WITH SLIMY AND WEIRD ITEMS FOR AMUSEMENT AND SPORT, limiting thereby the par value of said party to 0.01 satoshi, and foredisclaiming all untoward advances or ventures not subsequently snapchatted (snapchattéd?), instagramatized, nor rendered in 20 foot helvetica broadside. So help us. Er, and you. All of you. ALL ONE! ALL-ONE! ALL-ONE! (All similarities to the works of Dr. Emanuel Bronner are coincidental, hearsay, and #fakenews, please see reverse for details, settling may occur during shipping, handling may occur via settling). You didn't hear this from me. © 1492, Isabella I, Queen of Castile.